Tears is in Layout

Nathan Paoletta’s work continues and it’s really gratifying to see the text laid out. It looks like a real book!

There’s still work to be done in tweaking the layout and settling in some elements. I’m on another hunt for typos as I review. In the meantime, Nathan is working on translating my Excel spreadsheet character sheets from the demo package into real character sheets. Once all of the page numbers are settled, I can begin setting up the files for the accessible text versions and soon start the audio recording for the digital talking book.

Nathan recently joined the crowd-patronage support network Patreon. If you enjoy his work then consider making yourself an ongoing backer of his future projects.

CRC Cards On the Way

CRC ID cards have been ordered so I’ll have them to pack in with books for the SAInt and higher tier backers. Take a look at the digital proof: 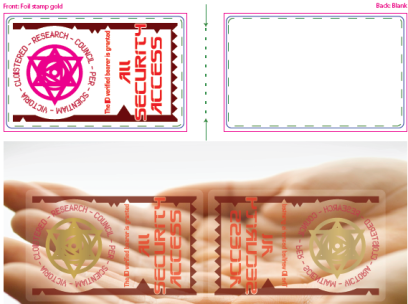 The hands in the lower half of the image are not to scale. They’re just meant to demonstrate that the card is transparent.

Metatopia was great fun. It’s a always wonderful opportunity to get in touch with other designers. In addition to presenting my own panel on Accessibility Issues for Game Designers, I attended many other panels with subject ranging from the nuts and bolts of layout and design, presented by Hal Mangold and Fred Hicks, to discussions of how to broaden perspective beyond the typical narrative, presented by Joe McDaldno, Julia B. Ellingboe, Elizabeth Sampat, Brennan Taylor & Krista White.

I was also able to playtest a new horror game design and it was a great experience. I wrote the first draft of eyeteeth in a week while suffering through a toothache, so once I was back in my right mind, I wasn’t sure what to make of it. After seeing what my eager players did with the story and mechanics I brought to the table, I think it’s got some life in it and could become my next project. I still think it will stay on a much smaller scale than Tears of a Machine.

In short, come to Metatopia 2014. Whether you’re a designer or a player interested in seeing what new things are on the horizon, you’ll find a lot of great experiences and great people.

More artwork, Preservation Force patches, the completion of the layout and the path to printing!

Thank you and may the SAInts preserve us.

Tagged as Metatopia, Tears of a Machine

One response to “Tears Progress and Metatopia”